Miss America Through My Daughters Eyes

When Zoe heard that Miss America was going be on TV she couldn't wait to watch it.

Last year she participated in the Little Sister Program which is part of the Miss Delaware Pageant and she had a ball.  She got to get dressed up, dance a number on stage, and escort a Miss Delaware participant {Miss Rehoboth Beach} during the evening gown performance.  She was in heaven! 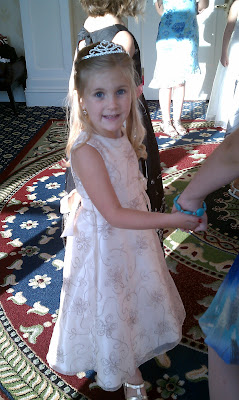 So Saturday night Zoe and me cuddled up in bed cheering on Kayla, Miss Delaware.


Since Zoe had met Kayla during the Little Sister Program she was intent on her winning and when it looked like she wasn't going to even make it to the semi-finalists the tears began.  Thankfully though Kayla came through as a people's choice and continued on.

and she continued and continued until she got into the top 10, a record for Miss Delaware.
GO KAYLA!!

Sad to say though that is as far as she got.
We are still proud of her though and as a mom I'm thankful that Zoe has somebody like her as a role model.  Kayla is a beautiful person inside and out and those type of people are hard to come by!

Anywho...
A recap of the show really wasn't I intended to write about though.
I actually wanted to share a few of Zoe's comments while she was watching the show.  I think she entertained me more than the pageant itself!

During the swimsuit competition:

During the evening gown performance:

She fell asleep before the talent contest or I'm sure she would have plenty to say about the dancers and ventriloquist!

Now I have to confess that I'm not a huge pageant person, but I sure was entertained watching it with my daughter.  We may just have to make this an annual tradition!