North Carolina and the Pumpkin Patch

Last weekend at the last minute we decided to jump in the car and drive to North Carolina to visit with my brother and his family. In case you didn't know, my brother is an active marine and currently his unit is packed and waiting for the command to head to Afghanistan. There isn't an official word yet, but rumor has it that he may leave before the end of the month. We shall see!
Anyways, my parents decided to head there last weekend since my brother had weekend leave and we though, what the heck, let's go too and have a family weekend. After a full week at work and school it was quite a long 7 hour drive on Friday afternoon, but totally worth it to hang out with everybody.
Since our weekends have been so packed lately, we haven't had a chance to get to the pumpkin patch so we took the opportunity to head to one in North Carolina. My sis in law searched a place for us to go and we headed there Saturday afternoon with, I believe, just about every other family who lived within a 30 mile radius. It was packed. You bought tickets to take a hayride to a field and then chose your pumpkin and rode the hayride back to weigh the pumpkin and pay. 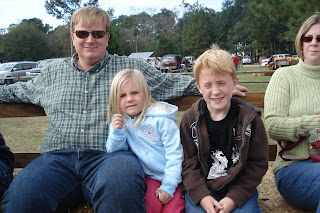 We discovered they had a great business idea as the pumpkin "patch" consisted of a couple very dry pumpkin vines with pumpkins strew around it. Obviously they don't grow many pumpkins in North Carolina!
It was a cute farm though. They had little wood building all decorated for fall. This is one where Grandpa took a break on a rocker, while Dylan mixed up something smelly in the cauldron 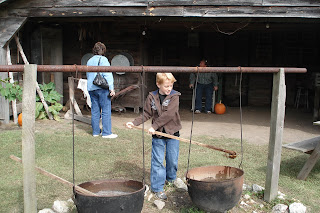 and picked some cotton from the cotton patch. 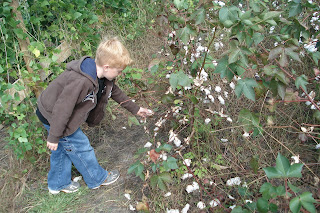 After searching the patch, all the kiddos found their pumpkins. 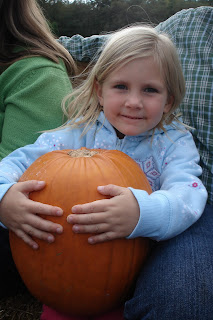 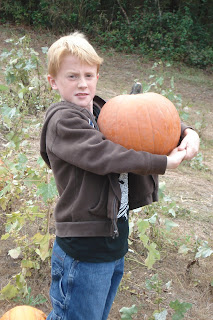 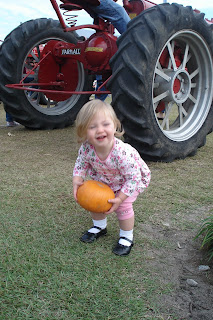 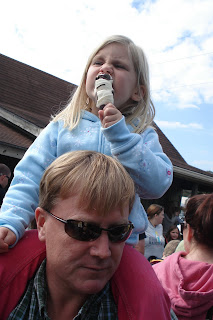 along with some interesting creme puffs and a delicious apple crumb pie, which Zoe devoured.
The rest of the weekend was spent hanging out and catching up. It was great to spend time with my brother, sis in law, and little niece. They are expecting a new addition to the family in December, my first nephew, and I enjoyed chatting with them about the baby too.
There is nothing like spending time with your family!
SUBSCRIBE to never miss a piece of chocolate
Be Sweet, Follow Mel on Twitter
Email ThisBlogThis!Share to TwitterShare to FacebookShare to Pinterest
Labels: family, pictures