Saturday during the day the kids and I headed for some fun in the sun at...yep, you guessed it. The BEACH. We actually got a late start, but they were driving me crazy so I thought the beach would provide some distractions and hopefully wear them out for a nap. We only stayed a couple hours, which was more than enough since they were not being the most obedient children and I was not being the most patient mommy either. Thank goodness that they did crash for a few hours once we got home because by that time I needed a nap too!!
For dinner, we picked up Dave's aunt and mom and headed out. Aunt Steph treated us to a delicious Mexican dinner at the Cactus Cafe. Zoe loved the pink car that was outside. She was also entranced with the man playing the guitar. I think he liked Zoe too as he came and sat next to her to sing her a special song that contained the words "Zoe is his friend." She was thrilled!! Great food, great entertainment, great atmosphere, and great times!! 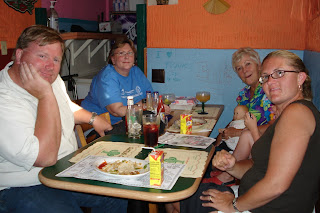 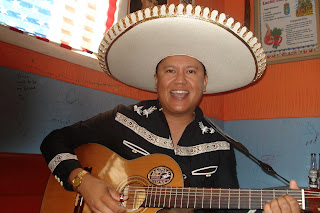 After dinner we headed up to Rehoboth Beach to meet a blogging buddy, Julie and her family. I have always enjoyed reading Julie's blog and when I found out they were vacationing in Lewes I asked her to give us a call if they ever got bored so we could meet up. They had decided to brave the boardwalk on a Saturday night to ride some rides at Funland and get some ice cream. She called to see if we wanted to join them. Of course, I jumped at the opportunity to get some ice cream meet a blogging buddy.

OK. I must enter a little story here. Before we went to Rehoboth we had went home because Dave had met us at the restaurant straight from work, so he had his motorcycle. We weren't going to take two vehicles into town so we went home to drop off his bike. When we got there the kids hopped out to use the restroom and as we were heading out of the house I noticed my son didn't have any shoes on. When I asked him where they were, he said, "In the car." Now this was totally possible since the first things my kids do when they get in the car is remove their shoes. I really don't know why and honestly never asked, but it's what they do. So I didn't think anything of it so we went on our way. I'm sure you are beginning to see where this is going. One thing you have to know about Rehoboth is that it is THE place to be on a Saturday night. Lots of people going out to dinner, shopping, strolling along the streets and boardwalk, visiting Funland to ride rides and on this night there was even a concert being held. Busy probably doesn't even come close to describing it. What you also have to know is that while all the people doesn't really bother me, Dave cannot stand it. So after driving around for twenty-some minutes looking for a parking place...let's just say we were not the happiest family around. We did finally score a spot though. As we were pulling in I guess Dyl decided to finally put on his shoes...except he couldn't find them...nor could I for that matter. His shoes were definitely NOT in the car as he had thought. So by this time we were already 10 minutes late to meet Julie and her family and now I had a son without any shoes. I considered making him walk all night shoeless, but being the great mother that I am ended up taking him to get a new pair of shoes. 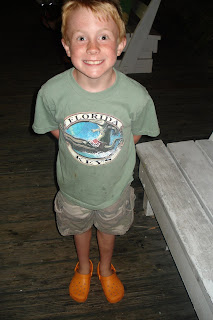 Do you like them? He is a big Croc fan and has been eyeing the orange ones for awhile so we figured there wasn't a better time to get them. Looking back it actually kind of sounds like something I would have done just to get a new pair of shoes. I'm going to have to remember his strategy!!

Anyhow, we FINALLY made it to the the meet up, a half hour late and little sweaty, but we made it. When I told her our shoe story she just laughed. I enjoyed chatting with Julie as we chased the kids here and there. It's funny how you feel like you already know somebody after reading their blog, especially after reading it for as long as I have been reading Julie's. It was almost like catching up with an old friend rather than just meeting somebody. Julie was as great in person as she is on her blog. She has two adorable little girls and Zoe was in her glory being with them. Emily and Zoe really hit it off and Abby was a great help in herding them down the boardwalk. The girls were all smiles as they rode a hot air balloon at Funland. 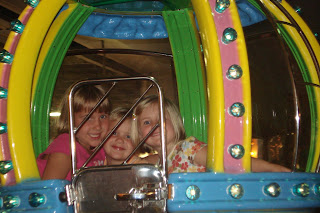 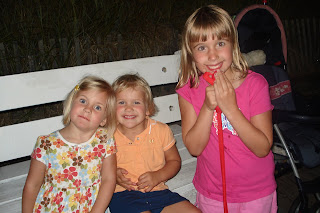 Afterwards we took a walk on the boardwalk for the staples of ice cream, snowcones, gelati, popcorn, and rock candy. The time we got to spend together went by fast, but I'm so glad we were able to at least meet up. I am really liking this meeting other bloggers thing except I have to remember to get my picture taken with them. Of course, I didn't get one with Julie, but at least you can enjoy our cute kids!!

So after riding a ride, fighting the crowds, and loading up on sugar we said our goodbye's and headed home. The kids crashed on our way and I was not far behind them because as soon as my head hit the pillow I was out. A totally exhausting day, but filled with so many good things!!