Saturday night Zoe had her first dance recital. She has been taking a dance/gymnastics class on Tuesday's when she and daddy are home together. This was my first time seeing her dance with her class. She was thrilled to be performing at "her" recital and couldn't wait to get on the stage. She had practiced her dance all day for my parents and was ready for the show. Me, on the other hand, not so ready...


We got there early for check in and to find where her group would be meeting before the performance. I must say that I was completely unprepared for what I saw in the backstage room. My daughter is 3 and most of the kids in her group between 3-5. Yet, in that room you would have thought they were in their late teens, early twenties and getting ready for Miss America. There were nekkid little bodies running around getting dressed, hairspray fumes that would make anybody choke, makeup in every color imaginable, and sparkles for everybody!! It was quite an eye opening experience!


When we got there we discovered that Zoe would not be performing until the third act in the second half. I had NO IDEA how long these things could take. First of all you had about 20 acts in each half and they seemed to be taking about 2-3 minutes each. Not too bad on their own, but in between each act we were waiting another 2-3 minutes for stage changes. Meanwhile, Dylan was dying of hunger, thirst, and Wii withdrawal so was not the most pleasant person in the audience!! I do have to admit it was pretty slow going and considering we had not eaten dinner because we had to leave so early my stomach was doing a bit of rumbling too.

Anyways, the time did finally come for her to perform and she had a blast!! I was so proud of her. I love that she was not afraid, but rather danced right on stage and never looked back. Here are some pictures and a little video of her performance.


My little ballerina backstage having a snack before showtime. 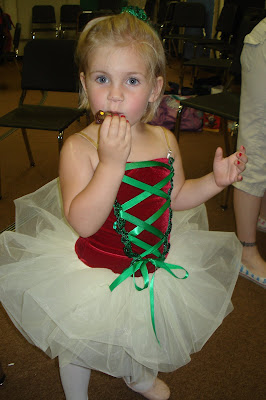 This is Jack...he and Zoe are best buds. 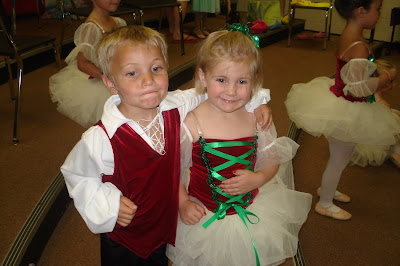 Here is Zoe, waiting in the hallway to go onstage. 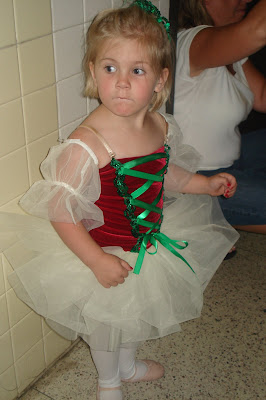 Zoe in her debut performance "Jack and the Beanstalk"

(She is the second little girl from the right!)