Things have been so crazy around here I just realized I never posted the pix from when the kids and I visited New York over Memorial Weekend. This was the kids first time and it was neat watching their wide-eye amazement over the tall buildings, taxi cabs, and busy streets. Our day was non-stop as we visited some must see stores...


First stop...American Girl! This is pretty much a must-do if you have a little girl. Zoe had brought her Bitty Baby (they were actually wearing their matching dresses, which was too cute) and we bought a new bathing suit for each of them so they would match on the beach this summer. 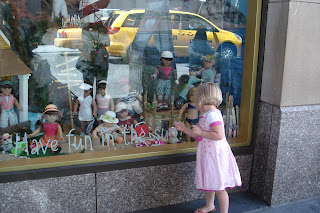 Then we headed to Sephora since it was right next door where I treated myself to a couple birthday things including Philosophy's Birthday Party package of bath gels. Zoe was in heaven while in the store as all the make up was right at her level. As I was paying she had a blast trying on the blue eyeshadow...yes, she had it everywhere!! I was so busy trying to get her to not look like she was just punched in the face that I forgot to take a picture.

Next, we had to do a Dylan store since, as he reminded me, we had went in two girl stores already. So off to the biggest Toys R Us you will ever see. Here is a pix of the kiddos in front of the ferris wheel that is inside...yes, INSIDE the store. 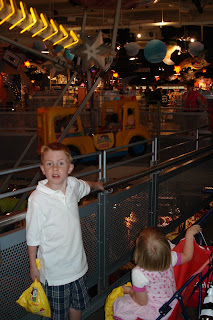 We also visited M&M world where Zoe made her a bag of pink, purple, and teal ones and Dylan's was full of bright basic colors. Don't even ask how much I paid per pound though!! 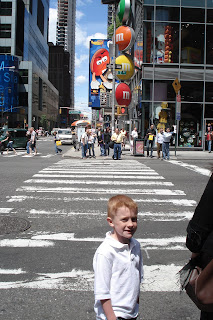 After our lunch of Ray's New York Pizza we headed to see our show. Mary Poppins! This was the kids first play ever not to mention first Broadway play. They were pretty amazed with Mary flying over the audience, Burt dancing upside down, and all the other cool stage effects. I don't know what I enjoyed more...watching the show or watching their faces!! 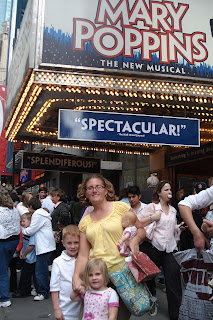 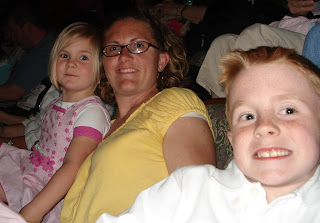 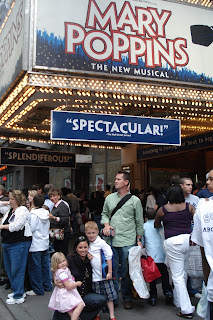 (This is Karlin and Keith, two of my favorite friends who came with to help me watch the kiddos!)

After the show we headed back towards Rockefeller Center to wait for the bus ride home. It just so happens that Anthropologie is right there too so since we were waiting...I scored the cutest skirt ever and a comfy tank top. I had to pacify Dyl though after dragging him in there so we also visited the Nintendo store where he got to test out Wii Ski. Here is a pix of the kiddo's on the ledge overlooking where the ice rink would be in the winter. Now there were only tables from the cafe. 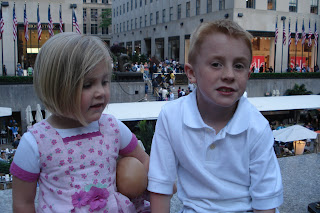 Needless to say, we all had a blast in New York for the day. We're hoping to go back over the summer to do some real sightseeing, like the statue of liberty and maybe some museums. I'm not sure yet if we should try to stay the night or not. Guess I should look into that!!
Email ThisBlogThis!Share to TwitterShare to FacebookShare to Pinterest
Labels: family, pictures