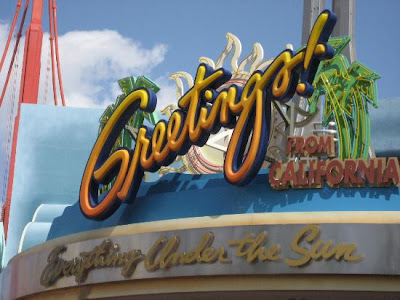 Well we made it to sunny California. The airplane ride was smooth flying although the last two hours were pretty painful probably for all people around us as Dylan and Zoe were getting plane crazy. I must say that if you are going anywhere that JetBlue flies I highly recommend them and not just because my brother-in-law works for them. They have tv's in front of every seat with satellite tv so I was able to watch my American Idol and the kids were plugged in to Nick and Cartoon Network the whole time. The tv's also have a flight tracker that shows what state you are flying over, speed, and altitude. Dylan enjoyed tracking his process. We ate dinner before we boarded because dinner was not served, but there was an assortment of snacks you could choose from along with drinks and you could get as many as you want. JetBlue also serves Dunkin Donuts coffee!!! Can flying be any better??!! Oh and did I mention the comfy leather seats with loads of leg room? You have to try them because you won't fly anything else again!
After the very loooong flight we made it to California and other than trying to drag two extremely exhausted kids, four large suitcases, three carry-ons, and a stroller through an airport to a shuttle bus it went well. We got our rental car and found the hotel without too much problem. Of course by the time we got to the hotel it was 1 am back at home so everybody was a bit grumpy. Thankfully the hotel has comfy beds and lots of pillows.
San Diego is a pretty neat place. Seeing all the mountains and driving up hills is an experience in and off itself after living in the flat lands of Delaware for the past 9 years. Back at home they keep talking about over development, but they haven't seen anything compared to here. The houses are cute, but yards...what are they? The houses on top of the cliffs are very cool although the thought of stepping off the back porch and sliding down the side of the mountain is a bit intimidating. The kids have seemed to adjust to the time change pretty well. We are all up early around 6 or so, but that is later than we usually get to sleep in so I still feel rested.
Yesterday we spent the day at SeaWorld (pictures will be in another post!) and then in the evening drove around to Coronoda Island. We had to take a verrry high and verrry long bridge to get over the island, but it was well worth it. Such a pretty island with gorgeous houses, nice cars, and lots of preppy people. There was a road that went through the island to Imperial Beach where the boys walked on a fishing pier over the Pacific Ocean. Imperial Beach reminded me of our beach towns at home with people walking around with surf boards. It seems weird having the ocean to our west since it has always been on the east for us. Watching the sun set on the ocean was strange! We were going to try to have a nice dinner, but by that time the kids were napping so we ended up doing a grocery run for some breakfast and lunch stuff and went through the Taco Bell drive through for dinner. By the time we got back to the hotel it was 8p and we were all pretty much done in. I was snoring by 9...no LOST for me!
So now we are here at the hotel getting ready for an adventure to Legoland! Dylan is super excited and Zoe is just kind of going with the flow. I'll be sure to take lots more pictures and share some more of our adventures! I am working on the SeaWorld video now, but everybody is getting pretty impatient with me considering I am trying to upload all 78 pictures!
Email ThisBlogThis!Share to TwitterShare to FacebookShare to Pinterest