If you have been a regular reader around here, especially through the summers, than you know that I love me some steamed crabs. Sit me down at a table covered in newspaper, with a pile of crabs in front of me and I'm one content lady. I will literally sit there for hours gorging myself on the meat covered in Old Bay. My mouth is drooling just from writing this.

Throughout the many years of living near the water though it had never really occurred to me that we could go crabbing and actually catch our own. I mean we fish, we clam, but crabbing? Then, the other day, hubby decided it was time for us to become "chicken nekkers" and go out and get our own crabs. He came home with crab pots (he had bought them at work and actually carried them on his motorcycle home...oh yes!) and then went out to get some handlines and chicken necks, the crabs food of choice I'm told. 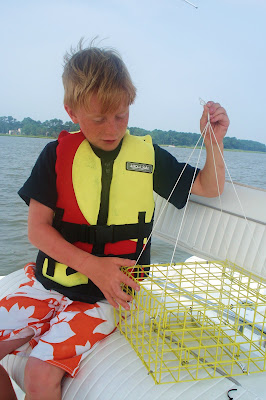 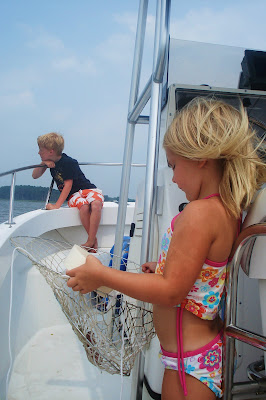 So a couple Sunday's ago we headed out to catch our feast of crabs. I couldn't wait to pull up all those huge crabs and bring them home to feast upon them for dinner. So out we went, rigged up the pots, and dropped them in. We had 5 of them all together and the moment we got the last one in the water, hubby decided it was time to go back to check on them.
We pulled one up...nothing.
We pulled up another...1 baby crab.
Next one...another baby crab.
Next...nada.
Last one...empty.
No worries though. We were just beginning. So back in they all went.
Then back we go to pick them all back up.
First one...nothing.
Second one...baby crab.
Third one...baby crab.
Fourth one...By golly it was a crab big enough to actually measure, but alas too little to keep. 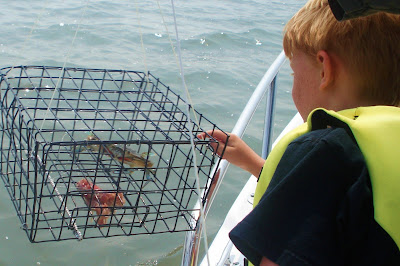 Fifth one...nothing.
Once again we remained optimistic. After all this was fun, right? So we drop them all in and this time decide to go down the river a bit to try out luck at handlines.

For those of you who do not live anywhere near water or crabs let me explain. A handline is basically a string with a hook at the end of the line where you put on a crab neck, then you toss it in the water, wait a bit, and then pull it up slowly, praying that there is a crab holding on to the chicken neck for dear life. If you see one, then you get a net and catch it. On our adventure, Dylan became "net boy" and oh how Zoe enjoyed calling him to come catch what she just knew was the biggest crab ever on the end of her line before she had even pulled it up enough to see. Her brother became quite annoyed to say the least!! 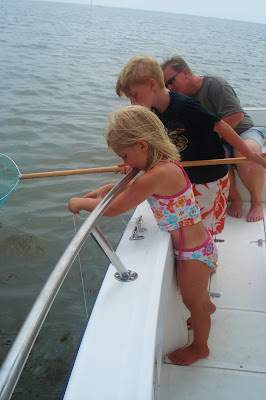 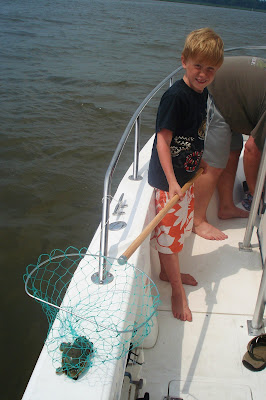 After crabbing this way for about an hour we had exactly 1 keeper crab. Yep, 1! So we decided to go empty the dozens of crabs that were surely waiting in our pots. We pulled in the pots and...2 more keeper crabs. Woohoo we were up to 3 crabs about 3 hours later!
We decided to try a different spot after that so we rode around awhile and found a new spot sure to have a bounty of crabs. No luck.
We decided to try another spot. No luck.
We tried our final spot and you guessed it no luck.
Okay maybe I'm being a bit negative here.

We did after all catch 7 keeper crabs after 8 hours on the water!
Definitely didn't have a feast with them, but they did make for some tasty crab nachos!

To all the professional crabbers out there...I say thank you.
Your delicious crabs are worth every penny that I will be paying for them!!
SUBSCRIBE to never miss a piece of chocolate
Be Sweet, Follow Mel on Twitter
Email ThisBlogThis!Share to TwitterShare to FacebookShare to Pinterest
Labels: family, pictures