I Ran, I Conquered, but I Thought I Was Going to Die

On Sunday I ran my 3rd 5K race.
This time it was the Bel Air Town Run in Maryland.
I couldn't have ordered better weather as it was in the high 60's with bright sunshine and blue skies. Gorgeous.

On Saturday, I stopped by to pick up my race packet from a running store and discovered that there were over 2,000 race participants. I had no idea that this race was so big. I thought the first race I ran was big and it only had about 400 runners. The guy at the store told me I had to pick up my timing chip the next day at the race. This was completely new to me as the only timing device I had ever used was my handy Nike +. Later, I discovered the timing chip was used to determine your actual timing as there was an electronic pad at the start line that began your time when you crossed and another at the finish line. I guess I never really thought about how your time could be inaccurate considering it could be a few seconds before you cross the finish line with a couple thousand people surrounding you!
Anywho, my dad drove me to the race early Sunday morning to pick up my chip and I met up with a couple old friends so we could run together. We walked to the start line and proceeded to disappear in the crowd. Dad was in charge of the photography since Dave couldn't make it and here is a pix of the start line. 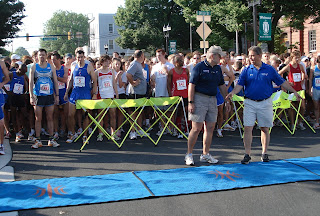 It wasn't very long and then we were off... 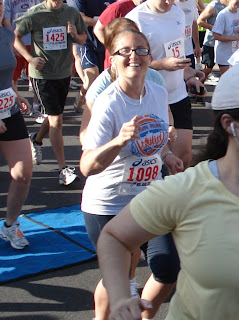 Saturday my mom and I had driven the course and I discovered it was very hilly especially considering I live in an area that is below sea level and the only hills we have are from bridges crossing the inlets. To say I was intimidated would be an understatement. My last race I ran in under 40 min which was my goal, but I had figured that with the hills I'd be happy with under 45. I started off feeling pretty strong and when I checked my pace discovered I was running faster than my usual pace. That kept me motivated to keep going since I was doing so well. Then came the hills. Oh the hills. I had decided to just take my time, but NOT to resort to walking. I wanted to at least jog up the hills. So I did! I pushed myself all the way to the top of hill after hill after hill. Finally the finish line was in sight along with my mom, dad, kids, sil, and niece. They were all cheering and I saw the clock going on 40 so I decided that it was time to kick it up a notch. I sprinted to the finish line passing a few people at the last minute. 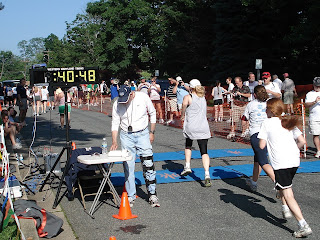 40:48
Definitely way better time that I thought it would be. I was very proud that I almost met my 40 minute flat course goal with all those hills. Of course I had to hold on to my dad as I found a place to sit down because I seriously thought I was either going to pass out or vomit everywhere after crossing the finish line. You will be happy to know that I didn't do either!
It was great to be able to run the race with some friends. This was Erinn's first race and she beat my butt. She rocked the course and I'm so proud of her. When are we running our next one? 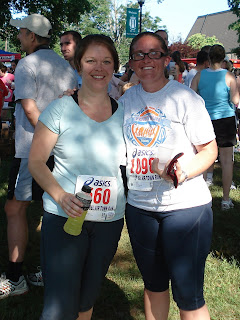 I've known Jodi since early teenage years, but haven't seen her since my wedding which has been 10 years this July. She still lives in Maryland and it was great to see her. 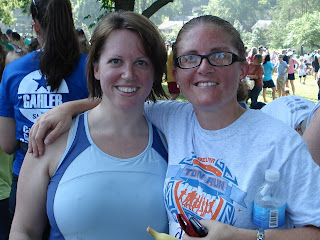 I still can't believe that I'm actually running races. Me?!
I'm living proof that if you believe it, then you can achieve it.