Hardboiled's better for the hunt 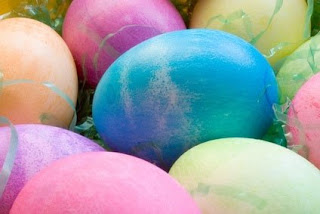 Yesterday, I planned a spring party for my students that included special cupcakes, a huge egg hunt, and yes, the dyeing of eggs.

Every year I try to add something new to what I do with my class to keep it fresh so I thought this year I would dye eggs with them. I always like to give my students experiences because you never know which ones do not have the opportunity at home. So I sent home a letter asking parents if they would like to donate hard boiled eggs so that we could dye them at school.
So today I had dozens and dozens of eggs come in. (I have some rockin parents this year!!) When I was setting up everything, I mixed the eggs to sort them for the students. Since I had so many come in I volunteered to share some with a new teacher next door who hadn't planned on dyeing eggs. Everything went smoothly with the dyeing. The kids had a blast and it wasn't nearly as big of a mess as I imagined.
Skip forward about 2 hours later when I receive a frantic email. Evidently one of my students brought in the wrong dozen of eggs and come to find out the eggs were not cooked! Yes, that would be a dozen raw eggs mixed in with about 8 other dozen hard boiled eggs. Talk about a needle in a haystack. I knew there was some trick with spinning them, but even if I knew it then that would have been disastrous to have my students spinning eggs with the chance of some being raw. No thanks!!
Instead I was honest with the kids. I told them there was a chance some of them were raw and since we hadn't kept them in the fridge they should just use them for decoration and not try to open them. Everything was going along swimmingly with my plan until the end of the day as we were packing up after the end of a great day.
One egg drops. Yep, it was the raw one. Thankfully it landed on the tile in the room. Pshew. No harm done and easy clean up.
Then one rolls off a desk. Yep, another raw one. Not as lucky this time as the egg yolk scrambled on the carpet.
Another starts to roll, kids make a grab, and it's a miss. Crack. You guessed it. Another raw one on the carpet.
I'm thinking my custodian will be vetoing my idea of another egg hunt next year.
At least I gave him a cupcake!!!
Let this be a lesson though:
When your teacher asks for eggs for dyeing please make sure they are cooked first!!
Subscribe in a reader
Follow me on Twitter
Email ThisBlogThis!Share to TwitterShare to FacebookShare to Pinterest
Labels: As a Teacher