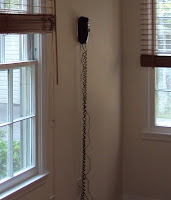 When I was my kids age we had one phone attached to the kitchen wall.  I thought it was great when we got one of those looooonnnngggg curly, stretchy, cords so I could walk pretty much throughout our whole house talking on the phone.  Of course I could only use the phone if we weren't expecting a call {didn't want dad getting a busy signal when he called} or my mom wasn't talking on it. Limited access for sure.

Then in my early teens we became a little more techie and we got a cordless phone.  WOW.  I could walk around the house or even outside. Without a cord. Who would have thought?

When I was probably 12 or 13, I can remember my neighbor friend's parents getting a car phone.  NO WAY. Her dad worked for the phone company so he got a big ol' box, about the size of my dad's toolbox, that held a cellular phone to carry in his car.  There was this detachable antennae that stuck up a couple feet from the roof of his car so that the phone would work.  Who would have thought somebody could talk on a phone while they were driving?

Fast forward four years later when I started driving and I got my first cellular phone.  Everybody needed to have a cell phone just in case there was that emergency. No big toolbox required. Although my Nokia definitely took up enough space in my purse.

Now 17 years later, I've been through many cell phones.

They've gotten smaller and smaller over the years, the antennae got shorter and shorter until it disappeared, and boy has it gotten smarter.

Today, we don't have a house phone.
I have a cell phone, Dave has a cell phone, and last year we got the kids a cell phone to leave in the house or take with them to places when I'm not there.  My children will never know what it was like to be tethered to the wall while they chat, or to pull up an antennae to be able to hear the conversation.

I can't wait to see what communication device they will be using when they have kids.
Email ThisBlogThis!Share to TwitterShare to FacebookShare to Pinterest
Newer Post Older Post Home