A couple weeks ago I got lucky and won tickets to Bugs Bunny on Broadway at the Merryweather Post Pavilion in Maryland from Tech Savvy Mama. 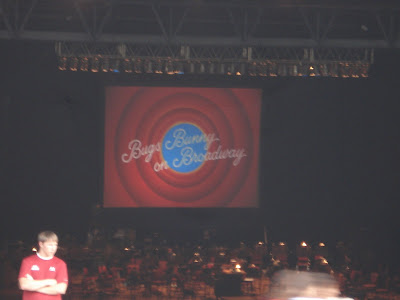 I wasn't quite sure what to expect, but figured Bugs Bunny, music, a free night out, we would enjoy it no matter what! Dave was hoping to go with us, but then we couldn't figure out what to do with Max so he opted to stay home and my mom joined us for the excursion. 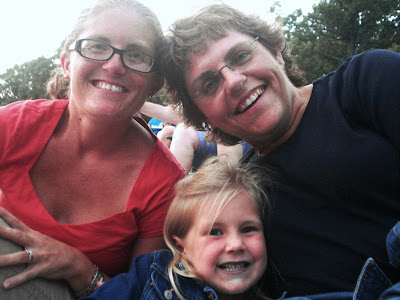 Even though I grew up in Maryland I had never been to Merryweather before. Evidently there have been some pretty big concerts there like Grateful Dead, REM, and yeah, I can't remember the others, but as I was reading some of the signs throughout the park there were names I knew. Basically it is a concert pavilion in an opening in the middle of some woods. We parked the car and then hiked down a path in the woods that crossed a stream and then back up a hill to the gates. There may or may not have been just a bit huffing and puffing from me when we finally reached the ticket booth.
Once we got through the gates there were vendors set up with hot dogs, chicken fingers, fries, ice cream, popcorn, beer, margaritas, and of all things...sushi! The pavilion has seats under it that are more expensive and then you can buy cheaper lawn seat which means you bring a blanket or chairs and find a place to set up camp. We had lawn tickets so we made our way through the vendors to the open lawn on a hill that looked down into the pavilion to spread out our blanket. 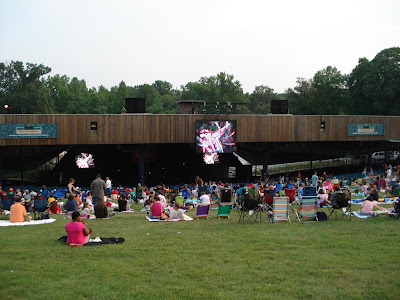 We had about an hour before the show so we decided to explore the area. Around the pavilion there were many different metal sculptures. The kids especially enjoyed climbing on the chicken. 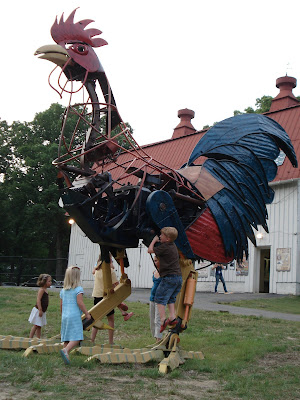 While we were waiting for the show to start Mom treated us all to brownie sundaes and Zoe got a slushie. They were pretty good, but oh my goodness were they pricey. Good thing the tickets were free! 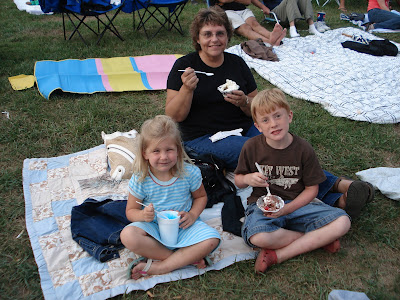 As the sun begin to set, the show began. There were four huge TV screens that showed Bugs Bunny Cartoons and then the Baltimore Symphony Orchestra played the music to accompany them. It was pretty cool I must say to watch the cartoon and then hear the music being played right there in front of you. The conductor took some time to talk about classical musicians, their music, and also show a special violin that made the Looney Toons opening sound. The kids were entertained throughout the entire show and I enjoyed listening to them laugh at the cartoons. 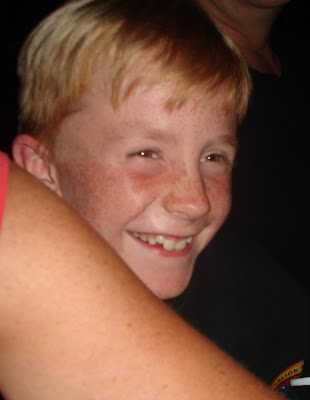 I was glad that my mom could join us for the night out. We had a fantastic time. You don't even want to know what we were laughing about!! 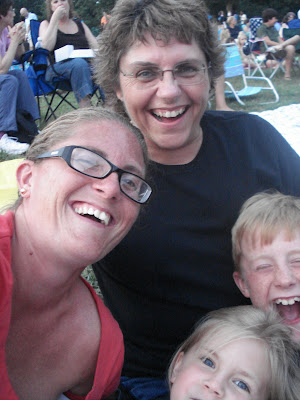 I'm definitely going to keep an eye out for bands who are playing at Merryweather because it was such a fun atmosphere and it would be a great place to go with Dave for a date night.
SUBSCRIBE to never miss a piece of chocolate
Be Sweet, Follow Mel on Twitter
Email ThisBlogThis!Share to TwitterShare to FacebookShare to Pinterest
Labels: family, pictures