This morning I accomplished one of my most physical goals.
I ran a 5K!
I joined my friend Holly, a.k.a. my personal Jillian, in a Race for Autism. 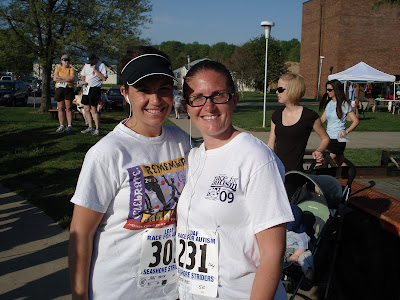 Holly was there the first day I ever stepped foot on a treadmill. She saw me go from walking to running, so what if it was for about 1 minute tops at that time. Throughout my running adventures she has encouraged me every step of the way! It was awesome being able to experience my first race with her.

The races were kicked off by a child singing the National Anthem that brought tears to my eyes. What a great way to start the race! Then it was the Kiddie Race, wow can those kids run. Next up was the 1/2 marathon racers, 13 miles of running...um no thanks! I don't think that will every be a goal of mine actually.
Finally it was the 5K racers turn to line up. I was surprised by the number of kids who were in the lineup to run the 5K. Holly kept telling me to not let them fool me because they were about to kick my butt and boy she was not kidding. Before we hit the main roads we had to do one circle around the front of the school. I was so fast coming around the Dave almost missed the moment...
Then it was off to the real course. The great thing about Delaware is that it is flat so at least I didn't have to worry about inclines during the race. It was a beautiful morning for a race! I have to admit that it was tough at first having everybody pass me and watching them all run in front of me, but then I passed a couple of people which was awesome. The first 2K always kicks my butt, but once I hear my Nike+ telling me I'm at my halfway point the running seems to become easier.
I had just passed that point when I looked ahead and noticed that all of the sudden there seemed to be fewer runners in front of me. However, I could still see a couple people so I just kept following them. We made a turn to begin heading back and I heard the lady in front of me ask a policeman that was there directing traffic if this was the course of the 5K. Evidently the people I chose to follow hadn't a clue where they were going! The kicker? The police officers responds, "If you are doing the short race you missed your turn back there." Leave it to me to go further than I needed too on my first 5K!
So when my Nike+ congratulates me on reaching my 5K goal I was slightly ticked to realize that I still had a ways to go. However, I kept on running, huffing and puffing, until I finally entered the school parking lot where the finish line was. As I rounded the corner I could see hubby, my friends who ran with me (and obviously finished way before me), and another friend with her hubby who came to cheer me on. Suddenly, it was all good. 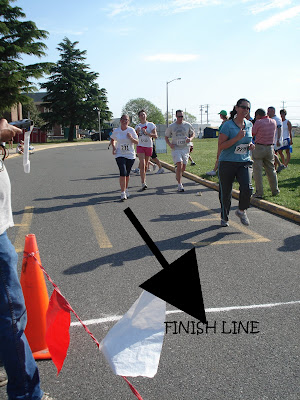 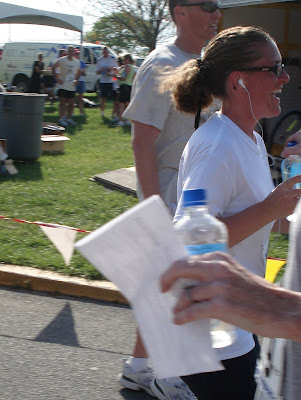 Did you notice that witch of a woman who came soaring past me?? Please let it be known to the world or at least my ten readers that that woman WALKED during the race. The other two that were behind me I have no idea where they came from. I slowed down to enjoy the satisfaction of completing my race and practically get run over. My next race I will be wearing the rear view mirror attachments on my glasses because nobody will be passing me at the finish line.
Anywho, I finished 167th out of over 300-some racers. Not too shabby for my first race. 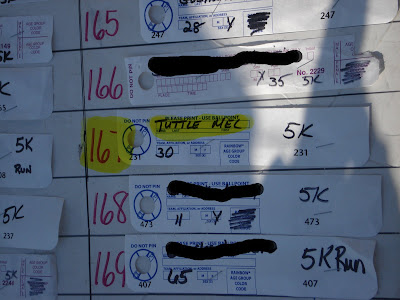 So now it's over.
My first 5K behind me.
It felt good.
I'm very proud.
Email ThisBlogThis!Share to TwitterShare to FacebookShare to Pinterest
Labels: family, Fitness