Manic Monday...That Pretty Much Sums It Up

Let me start telling you about my day by saying...I SURVIVED!

The day started right away on the wrong foot or perhaps I should say at the wrong TIME. Normally during the week I wake up at 5:20am, however hubby forgot to set the alarm clock from the weekend. My internal alarm clock didn't wake me up until 6:00am. Yes, that would be 40 minutes later than my normal time. Not good.

Oh and did I mention that today was the day that I had over 30 parents coming in for Thanksgiving dinner and I was hoping to actually be early to take care of some things since I wouldn't have any time to leave my room before everybody came in?

So hubby and I jump up and begin our morning routine. I take care of myself and he tackles the kids (we leave 45 minutes before he does so he always takes his shower after we leave). Of course today I also had to load the turkey, gravy, paper products, apple cider, clean bed sheets for Zoe's daycare since it is Monday, along with Dyl's backpack and my school bags in car. I grab a cup of coffee and we're out of there. Pretty much on our regular time although later than I would have liked since, you know, I had planned to actually be early today.

On the way to Zoe's daycare I realize that today is also movie day in the afternoon. That means I am supposed to have popcorn and drinks for my students who are going to the movie. That would be 18 of them! I decide I'm going to have to make a stop at Wal Mart.

I run into Wal Mart twenty minutes before my bell rings. As I'm grabbing the popcorn and drinks, I pass the display for Kung Fu Panda and realize that I was responsible for having that movie in the afternoon. I grab it and put it my basket and run through the self checkout.

Ten minutes before the bell rings I run into school, carrying turkey, gravy, apple cider, paper products, popcorn, and juice boxes. I am sure I was quite the sight. When I got inside I realized that I had forgotten to laminate the kids place mats so off to the teacher workroom I run. Just as I was heading back down my hall the bell rang.

The next two hours was then used to try to calm 19 very excited students not to mention keep them busy, move three tables from two other classrooms, and borrow thirty extra chairs from four other classrooms so all our visitors would have a seat. We finally got the room all set up around 10:30am.

By 11am families began arriving with their food. We had everything. Turkey, mashed potatoes, corn, green beans, collard greens, macaroni salad, macaroni and cheese, stuffing, rolls and butter. I haven't even mentioned desserts yet. There was pumpkin pie, apple pie, pecan tarts, chocolate cupcakes, sweet potato pie and all pretty much times 2.

It was a full house in our room with people too. Students, parents, grandparents, aunts, sisters... 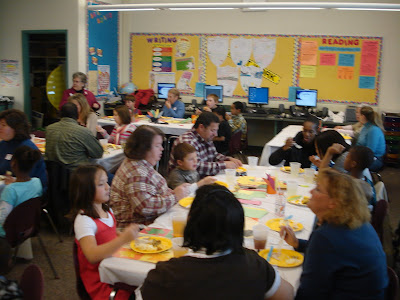 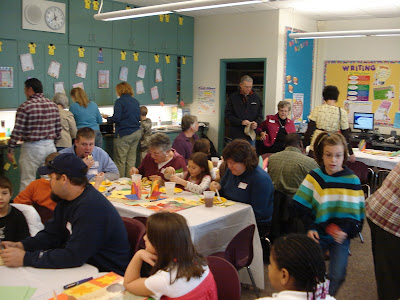 The kids were very well behaved! I loved watching them fill their plates especially the ones who I don't know for sure will have a Thanksgiving on Thursday. Many of them went up for 3rds, 4ths, and one even for 5ths. None of them were being greedy, just hungry, growing kids.

By the time it was over there were many empty dishes. Students with full bellies. Happy parents. Grandparents full of smiles. Sisters telling me they wish I was their teacher.

As I looked around the room I decided that it was all worth it.
These days are why I teach!

Most importantly, I survived!!

Email ThisBlogThis!Share to TwitterShare to FacebookShare to Pinterest
Labels: As a Teacher, family, Ramblings