Remember my Black Friday plan? Well I did it. I went, I shopped, I conquered.

I hit WalMart around 5am and scored a couple good deals. It took me about 20 minutes to get everything I needed, but of course I picked the slowest line in the store as a guy at front tried every credit card he had to no avail, but wouldn't get out of the line. I finally made it through about 40 minutes later and then headed to Target where I completely tanked. They had a huge Lego set on sale for 1/2 off and that was my focus for the morning. Of course since I was late from my Walmart adventure there were none left when I walked in at 6:10am (they opened at 6). It didn't help that Target is one of those stores that advertises an awesome deal and then only stocks 6. Honestly, if you are going to advertise something awesome couldn't you at least do like WalMart and get a pallet. So for the first time in history I walked out of Target with absolutely nothing!
Next stop...Toys R Us. Now usually I don't even attempt Toys R Us on Black Friday, but since I had already driven 45 minutes for Target I figured I would give it a shot. They had a few things that were on my list although since they opened at 6 while I was wasting my time at Target I didn't have high hopes of getting anything. Boy was I wrong! I totally hit the motherload there. I found the laser helicopters that Dave swore I wouldn't be able to find at 50% off, a huge Star Wars Lego set at 50% off, a princess trace and draw projector for $10, plus some great stocking stuffers. Unlike Target, they know how to do Black Friday and were restocking their shelves with the sale items. My mood went from down in the dumps after Target to flying high. Thanks Toys R Us!
I decided to head home then to spend some time with the family since after all Dave had taken the day off. The plan was to get the lights on the house so Dave dragged all the Christmas containers out from the attic so we could see how many new strands we were going to need. After spreading them out... 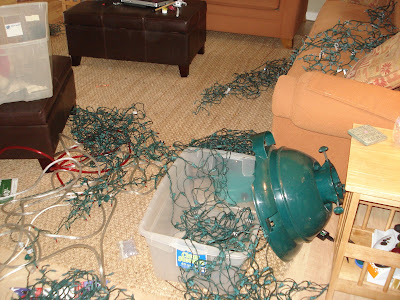 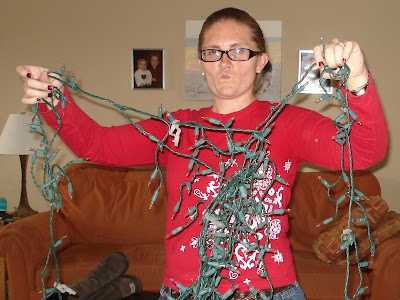 and plugging them all in, we discovered that we were going to need many new strands. I am still dumbfounded how we can be so technologically advanced and nobody has invented Christmas lights that will last more than one year!! Come on all you Einsteins out there!!
After making our Christmas lights list, we went to cut down our Christmas tree, however, discovered that the farm didn't open until Saturday. What a waste of gas. So instead we grabbed some lunch, bought our lights, and did a bit more Christmas shopping or looking I should say since we couldn't do much with the kids hanging over us.
When we got home it was off to the roof I went to put up the icicle lights. This is always my job as my hubby is not a big fan of heights especially without any straps holding him in. 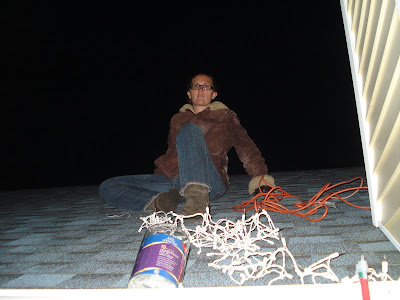 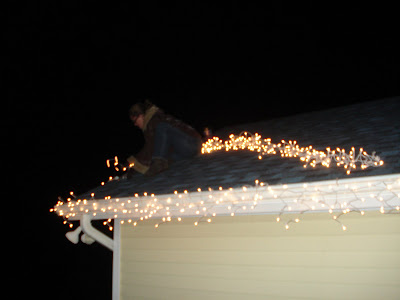 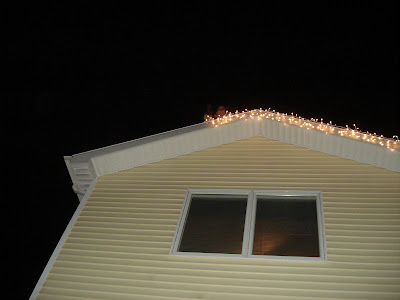 Finally our house went from this... 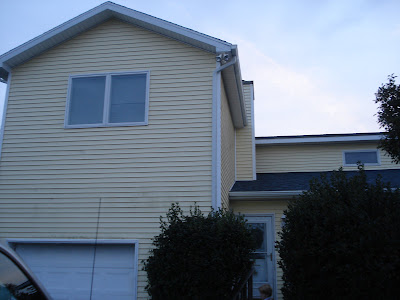 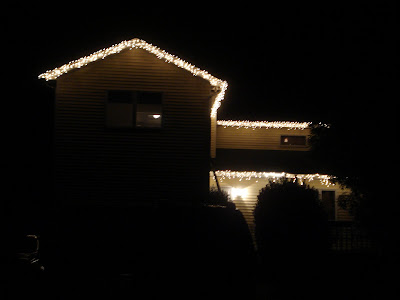